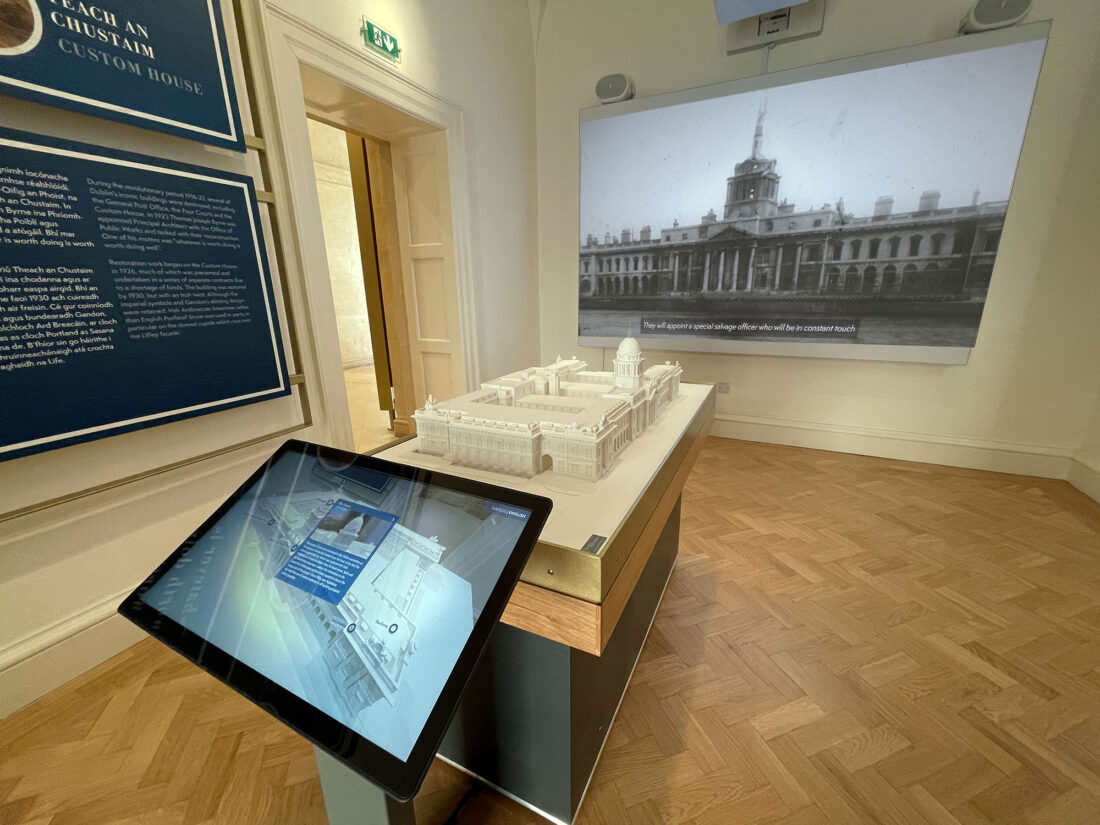 The Custom House witnessed not only the development of a great city, but also some of the most turbulent milestones in its history. The building was destroyed by burning in 1921 and later restored to its former splendour.

The stories of the building, burning and restoration of Dublin’s Custom House are brought to life in this fascinating exhibition, revealing a rich, many-layered story that spans over 200 years.

Working closely with the OPW and exhibition designers Bright, Thought Different produced over 17 different interactive, audio visual and immersive spaces for the centenary of the burning of the Custom House in 1921. 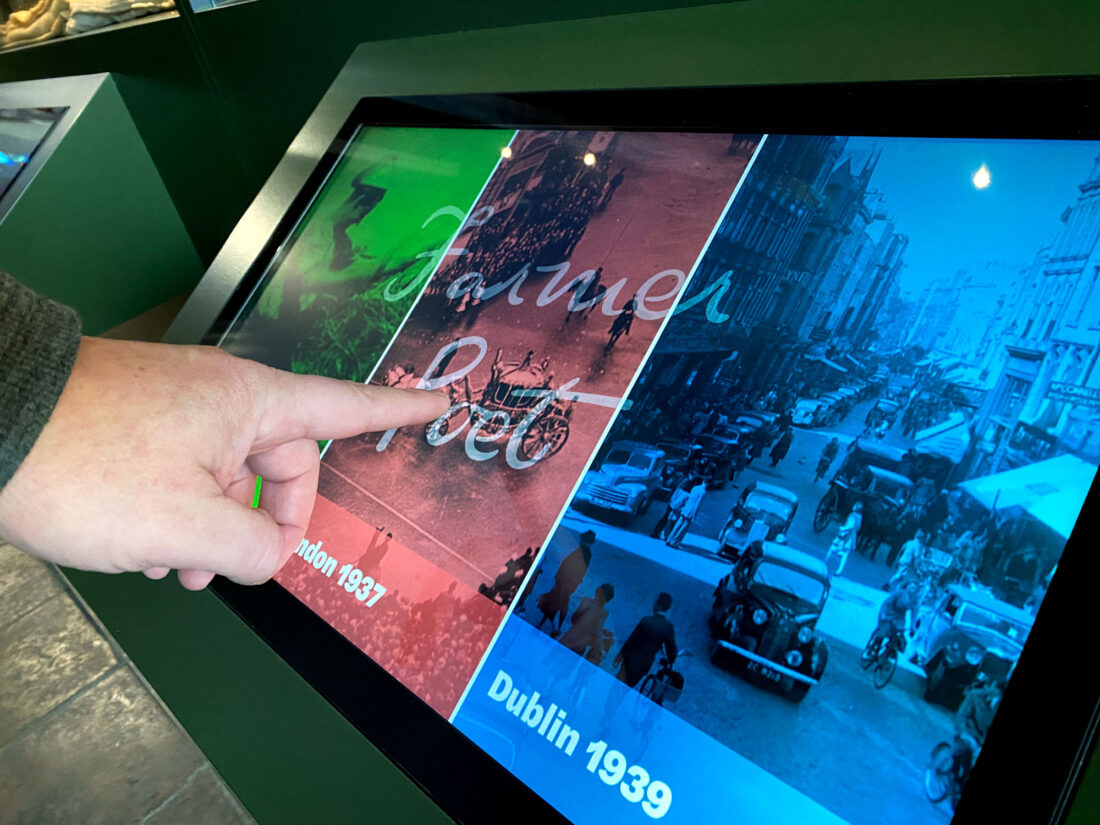 Opened just at the beginning of the first ‘lockdown’ in 2020, the newly renovated visitor centre in Inniskeen, County Monaghan houses a unique exhibition about the life and works of one of Ireland’s most famous poets, Patrick Kavanagh. Working with Make and Monaghan County Council we were awarded the tender for the interactive creation and design throughout the centre.

The old church, where Kavanagh was baptised, has been transformed into a permanent exhibition about the poet. Our work included a series of interactive touchscreens that help interpret the artefacts on display and also document his influences, personal life and poems created over six key stages of his life.

Another two large interactive screens explore the geography of the poets life. ‘Kavanagh Country’ highlights locations around Inniskeen where he grew up and highlights the Kavanagh Walking trail. It also delves into locations that are featured in his poetry. ‘Kavanagh’s World’ interactive explores his wider travels, from living in London to his trips to America and beyond.

Touch screen displays reveal documents, photos and information on Kavanagh's life and times...I've been waiting quite a while to get the chance to come and see it and urge anyone reading this to do the same. 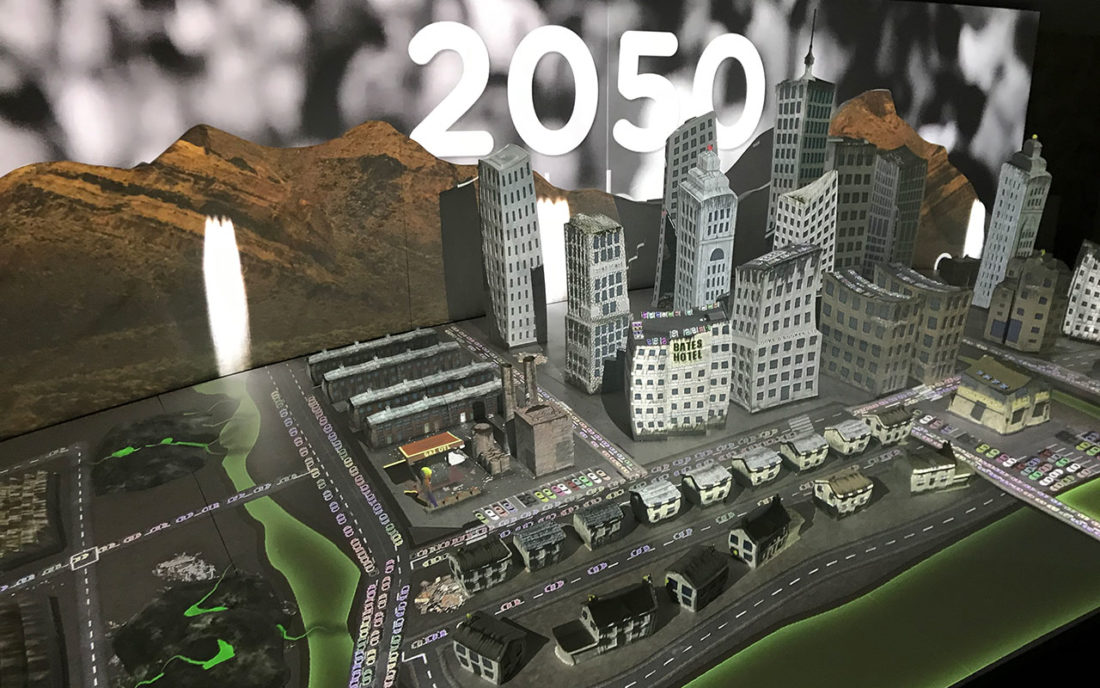 The Race to 2050 at The Cool Planet Experience marks Thought Different’s most complex installation to date. Race to 2050 is a unique multi-user immersive experience designed to teach children about their own impact on the planet’s climate. By playing a series of games they learn how small differences in their daily lives can effect their cities of the future. Working with DMW Creative, we were responsible for coming up with the original concept and taking the interactives through storyboarding, scripting, wire-framing; through to delivery.

Nine games were designed to illustrate key issues. Each of these 45 second games were created with three goals in mind. Only one sentence could describe to the user how to play; it had to subtly illustrate the problem at hand (eg. wasted food in supermarkets) and it had to be fun but challenging. The result has been a resounding success with children and adults alike.

On completion of a set of three games they are then rewarded for their hard work. The voice over explains how they have made a difference to the city and are shown the improvements as the city changes in front of them. For example after the transport sequence of games the traffic is greatly reduced, bus lanes and cycle paths appear with cyclists and public transport corridors. Car parks are replaced with green spaces and dirty petrol stations are converted to charging stations for electric cars. All these changes appear right in front of their eyes on the huge 8m 3D printed model through the use of projection mapping.

The entire experience lasts just over 15 minutes. However nobody notices the time passing and a common reaction during testing was simply – “Can we play it again?”.

By merging a creative idea with software and innovative technology, we can see we have achieved a huge goal. Helping children learn about big issues without them realising it; they think they are just having fun. Thought Different was nominated for Best Creative and won the award for Best Technology Innovation at the 2018 Digital Media Awards for their work on Race to 2050.

An excellent idea and use of technology to teach people (especially children) of the effects of climate change and how to protect our environment. The strategy is crystal clear from the start and the design of the set, the games, the video, voice-over, etc., is clear. I believe the results of this Race to 2050 experience will be huge...

... this Cool Planet thing is the best education-by-stealth experience we’ve ever had. I’d go as far as to say it was the best family outing we’ve ever been on.

Absolutely amazing games and projection mapping onto a model city with a fictional future goal...

Opened in March 2018, Thought Different completed its largest project to date, with over 40 interactive installations —the world’s first centre dedicated to informing visitors about climate change. Working with DMW Creative, Thought Different was responsible for all the software development throughout the experience. We also conceived, scripted and designed three of the seven spaces within the visitor centre.

Upon arrival visitors are handed ‘smart wristbands’ at reception. Their first task is to log in with their (RFID) wristband, enter their first name and then complete a series of multiple choice questions to calculate their own personal carbon footprint. As visitors progress through the experience they ‘tag on’ in each space and record their progress. After their visit, they can return home and view their progress online at www.cpe.cool and access further resources.

One of our most challenging video edits opens the experience in Cool Planet. The Disaster Scenario had a simple brief. Show visitors the beauty of the world. Show them the effect THEY are having on it. Show that climate change is already happening and not just a problem for future generations. The result is an emotional and unsettling piece that gets the visitor thinking from start.

Thought Different’s most ambitious and complex installation, the Race to 2050 is a multi-player game where the visitor is challenged to fix a dying and polluted city of the future. As they progress through the nine interactive games they can see the results of their actions on the large projection mapped city which was 3d printed with 100% recycled materials. The Race to 2050 was nominated for Best Creative in the Digital Media Awards and Thought Different won the Best in Technology Innovation category at the awards.

... this Cool Planet thing is the best education-by-stealth experience we’ve ever had. I’d go as far as to say it was the best family outing we’ve ever been on.

An excellent idea and use of technology... 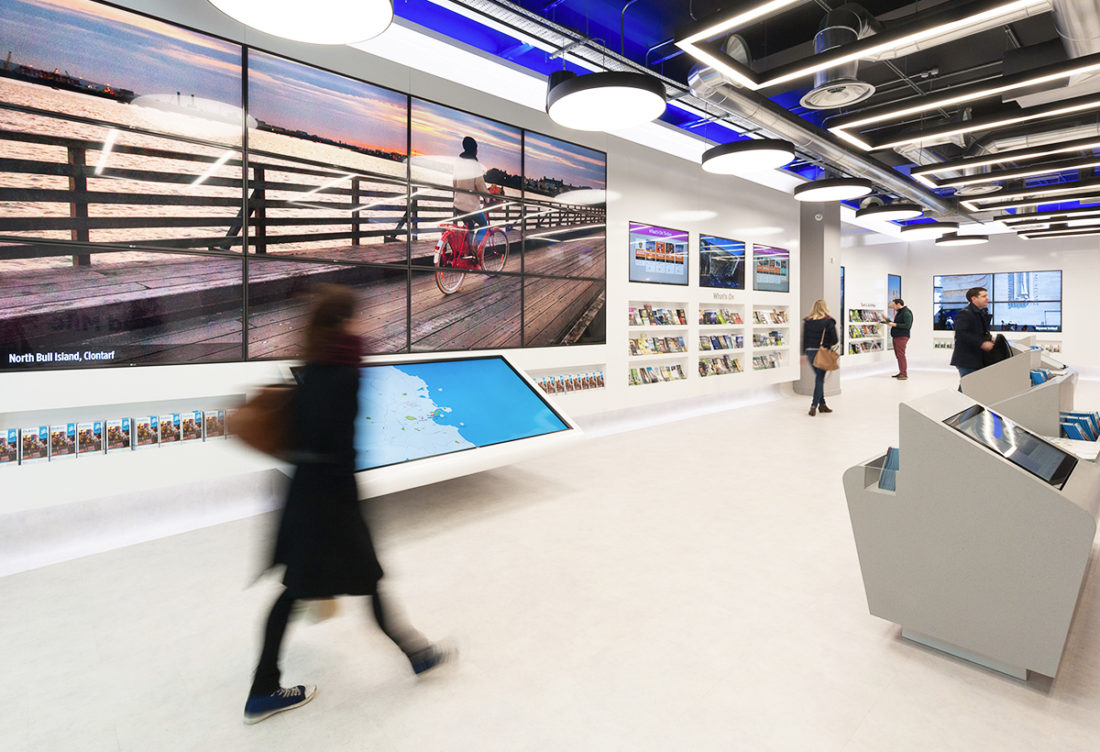 A large video wall shows specially commissioned 30 megapixel images of some of Dublin’s key attractions. The custom made software animates the entire wall at 60 fps processing over 1.4 billion pixels per second.

Thought Different designed interactive maps to help the guides show people places of interest across the city. Eight kiosks dotted around the space are filled with up-to-date information which syncs every night with Failte Ireland’s servers.

Using the hashtag #lovedublin, software was designed to allow the staff at the main desk check the multiple feeds from Facebook, Twitter and Instagram on a regular basis. They could then approve new posts that would appear on the large 84″ Social Media wall in the centre.

All Dublin has to offer is only two touches away... 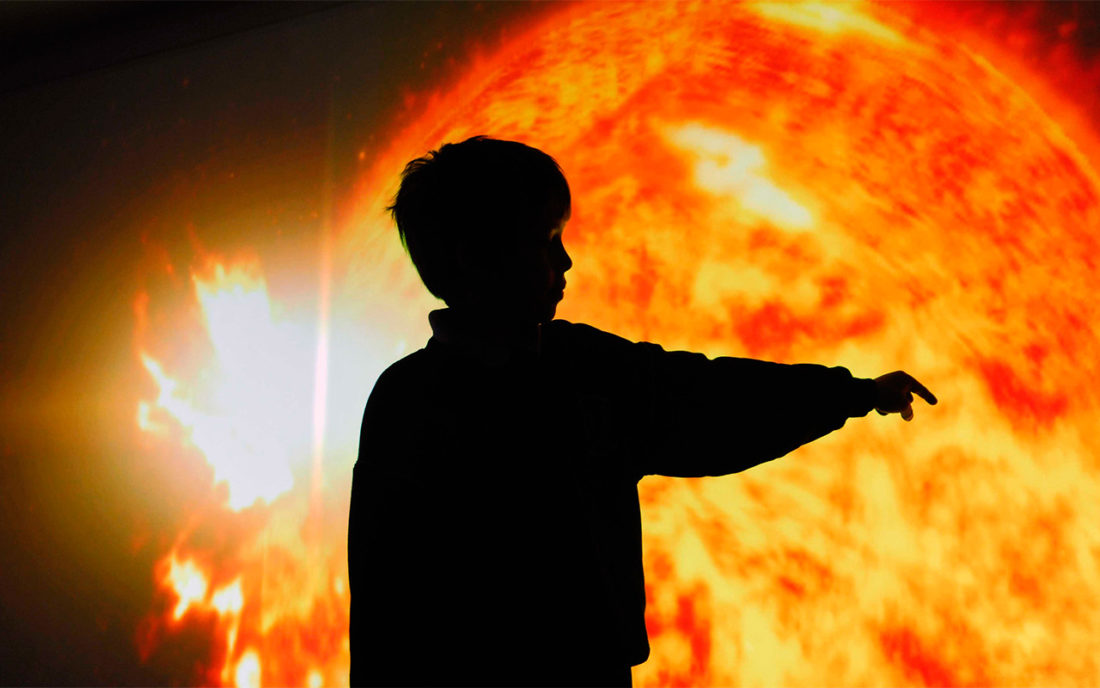 The experience takes you on a journey following the Rosetta mission and at different points challenges the audience to a series of mini games to help save the planet. Depending on how well the group does in the games will determine the outcome of the cinematic experience.

The interactive presentations on the screens are amazing and The Comet Chaser is a game, that I've never seen before. F A N T A S T I C!!!

An engaging as well as educational game scenario that is on a par with anything Disney could do. It has entertained family members from 7 to 17 and made them go back again for another go. 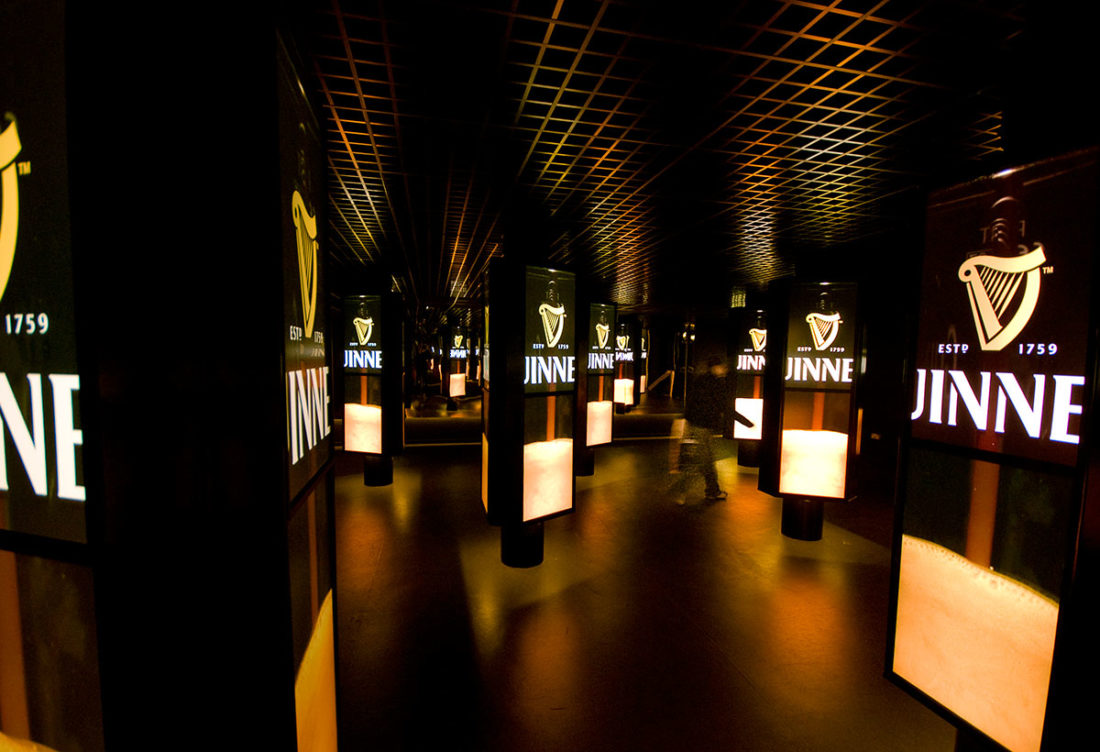 The Guinness Storehouse wanted an immersive experience to liven up the exit of their exhibition. Thought Different designed a truly immersive and interactive space with the help of 72 screens mounted in Toblerone shapes.

As you walked by the screens they would explode in a Guinness surge and light up the space. Every few minutes the entire space would be taken over and the entire room would be filled with pouring and settling pints of Guinness. 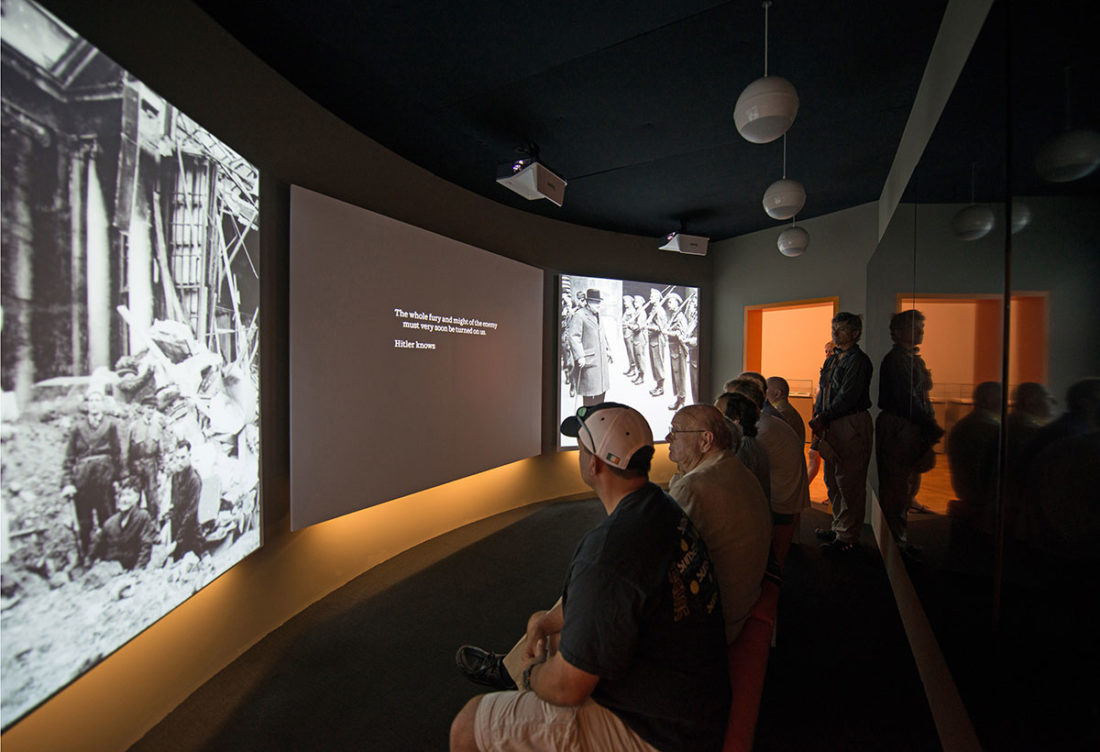 The ‘Churchill – Power of Words’ exhibit in the Morgan Library, New York required a unique approach to allowing their visitors to listen to some of Churchill’s key speeches. As Churchill wrote all his own speeches, and marked out the rhythm and beats to every line, we wanted to help the visitor visualise this prose and it’s construction while also listening to his performance.

The result was a simple, buy mesmeric reveal of each individual word from his speeches. We then further immersed the visitor by using key images from the Imperial War Museum to add context and further illustrate the speech. 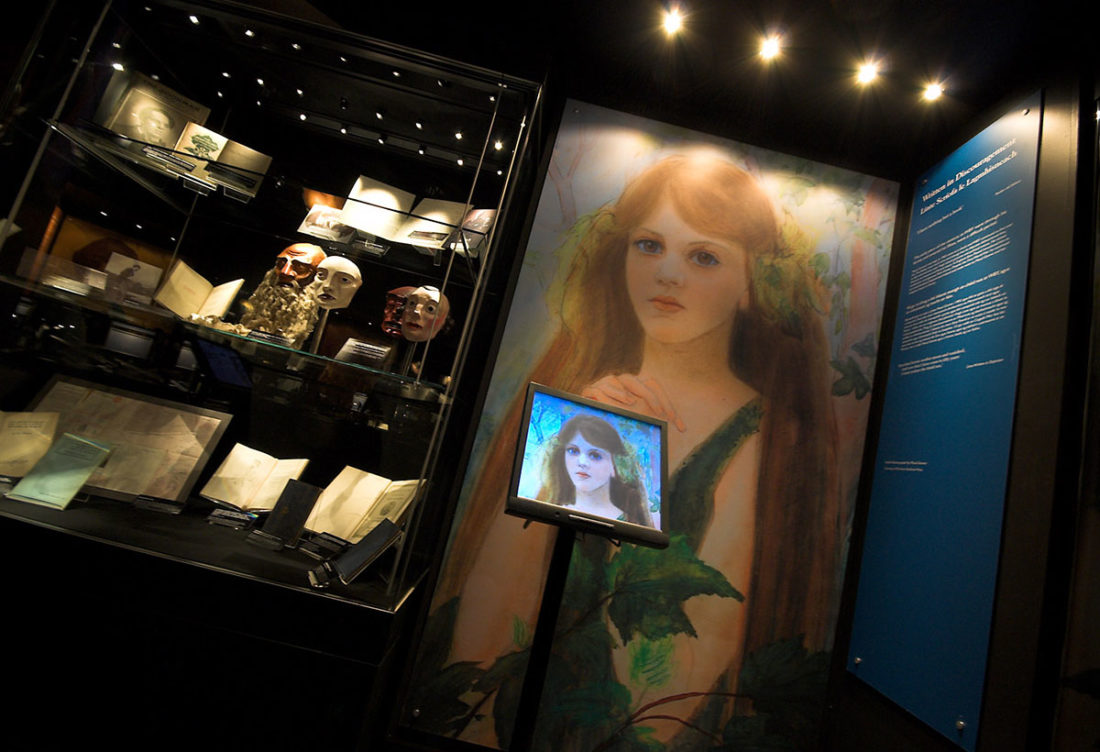 Yeats at the National Library

In 2005 the National Library opened its internationally award winning exhibition – The Life and Works of WB Yeats. Hundreds of documents throughout the exhibition were interpreted on interactive touchscreens that accompanied each display case. These interactives allowed you to delve deeper into the objects on display and see further documents in context. This model of presentation allowed the library to display thousands of documents that simply could not be displayed in the physical space.

In the opening area you can sit down and relax and immerse yourself in readings of some of Yeats’ poems. Specially commissioned photography accompanies the printed word to further stimulate the imagination.

The Yeats exhibit was fantastic, with excellent use of multimedia to bring what could have been a dry subject to life.